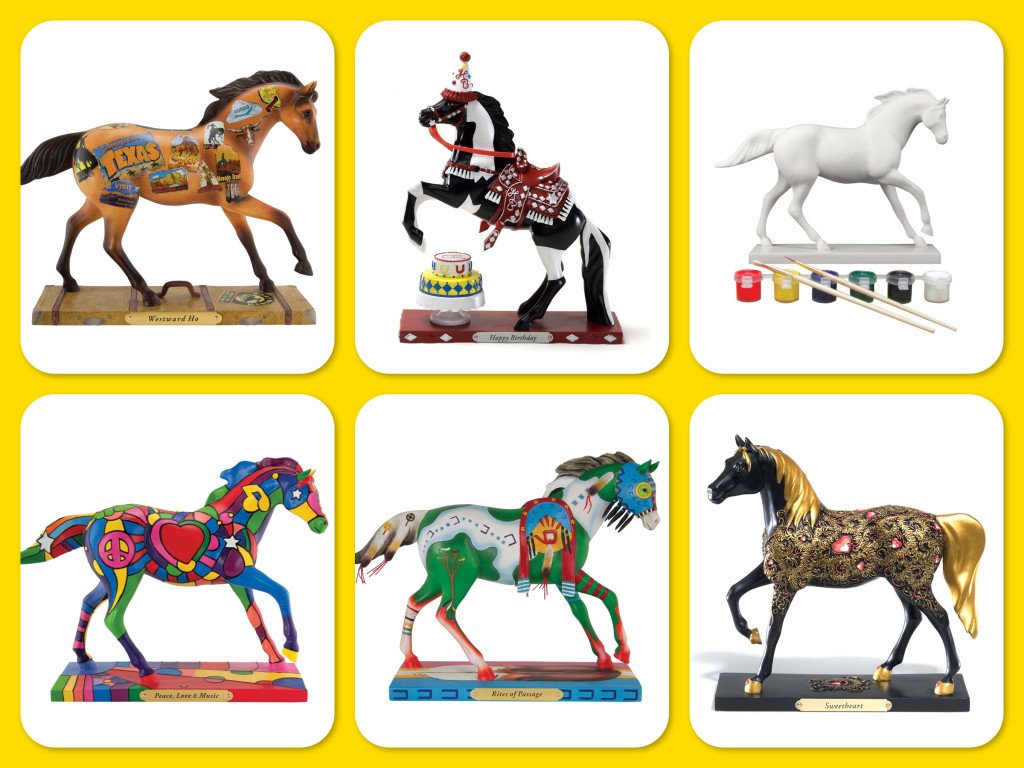 These painted horses are the Riding Corner's new obsession. We love them as collectibles, to give as gifts, to paint ourselves, to add to horse party centerpieces, and even to use as a cornerstone in a campaign to raise awareness and funds for equestrian related causes.

The Trail of Painted Ponies Figurines

Among the globe's most cherished collectibles, The Trail of Panted Ponies classic figurines are created by distinguished artists exclusively for Trail of Painted Ponies[,;.;; each work of art is crafted with exquisite detail into a resin or ceramic figurine that stands approximately 6″ tall.
…
There have been 202 Painted Ponies figurines in total crafted to date including 28 Holiday Painted Ponies, 9 Exclusive Painted Ponies, 4 Four Seasons Collection Painted Ponies, 1 Masterpiece Collection Pony and 2 Celebrity Collection figurines.
Generally The Trail of Panted Ponies announces their winter release on January 1. The Spring Release is announced on March 1 (except the Spring 2011 Release, which is announced on April1), the Summer Release is announced on June 1, and the Fall Release is announced on September 1. Each release includes four new Painted Ponies, and the Summer Release also includes four new Holiday Ponies. The first number on the bottom of the Painted Pony is the Edition Number. This number will have an “E” after it (example: 1E, 2E, 3E). The second number refers to the number of that particular Painted Pony in reference to the Edition that it was created in. This number will be between 1 and 10,000, since there are 10,000 Painted Ponies in each Edition. Twice a year The Trail of Panted Ponies retires a minimum of six Painted Ponies – or as they prefer to say, “We put them out to pasture.” They make the announcement on February 1 and July 1. When a figurine is retired it is no longer crafted, effectively turning it into a limited edition.
Autographed Editions are also available and were created as a way of giving collectors the opportunity to collect something special. Each is hand-signed and numbered by the artist who created the original Painted Pony, and are available with each new release. 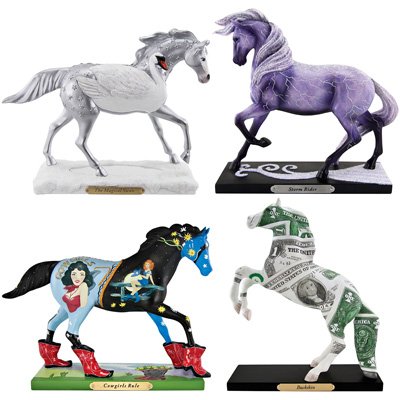 The Happy Trails Collection is a companion collection to the existing six inch line of figurines. The figurines are typically more youthful, whimsical Painted Ponies, making them perfect gifts for younger collectors, or collectors wanting to expand their existing Painted Ponies collections. They retain the popular “signature” look of Painted Ponies in that they are all miniature works of art, and they each begin with original artwork by an artist. Like the classic figurines, all horses in the happy trails collection come with a story. Newly introducted, the first release was announced on June 1, 2011 and the plan is for them to be released twice a year, in January and in June.

The Happy Trails horses differ from the classic painted pony figurines in that they are smaller in size by approximately two inches so they range from about 4 inches high to 6 inches high. They are less expensive – around $25. They feature less complicated designs. They don’t have a title plaque – the title appears on the underside of the base. The story appears on a decal on the underside of the base. They come with a production date symbol on the bottom, indicating the year they were manufactured (A horseshoe for 2011, a star for 2012). They are available only in resin.They come in their own distinctive packaging.They will not have editions numbers, or be available as Official Autographed Editions. 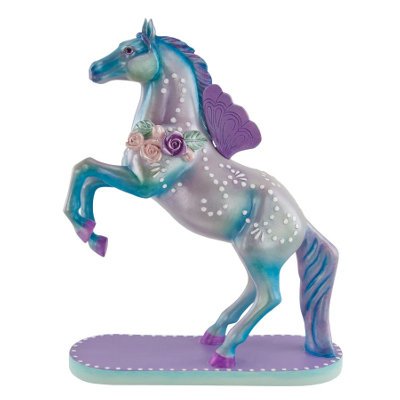 On April 1, 2001, The Trail of Panted Ponies announced their first release of their new Celebrations Collection featuring 12 miniature, hand-painted Ponies that celebrate birthdays, anniversaries and all of life's special seasons and moments. This “giftable” collection was created especially for collecting and gift giving. Like their larger counterparts, these mini figurines are created by artists and then crafted into a resin medium. They stand approximately 3 inches tall and cost only $13.99 each. In addition to being much smaller than the classic pony figurines, the celebrations collection horses each comes in their own distinctive packaging. They do not come with a story, or story card. They do not have edition numbers. 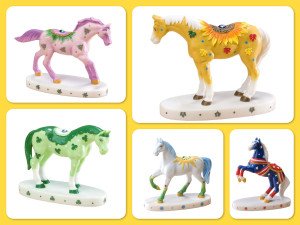 How to Collect The Trail of Painted Ponies Figurines

Retired Figurines are free to roam with other horses who performed wonderfully, but whose time has come to retire to the greener pastures. When a figurine is retired it is no longer crafted, effectively turning it into a limited edition. Autographed Editions were created as a way of giving collectors the opportunity to collect something special. Each is hand-signed and numbered by the artist who created the original Painted Pony, and are available with each new release.
…

History of the Trail of Painted Ponies Project

It all started as a public art for charity project in the state of New Mexico. Using full-size polyurethane horses, from an original form sculpted by world-renowned bronze artist Star Liana York, each of the118 artists transformed their canvas into unique works of art limited only by their individual imaginations. Today that Trail continues with existing and new artists continuing to use Star s horse as their canvas. Taking the country, and now the world by stampede, many of the original works of art have been transformed into ceramic and resin miniature horse collectibles available through Trail of Painted Ponies.

The documentary, The Trail of Painted Ponies (DVD), narrated by Ali MacGraw, a long time New Mexico resident, animal activist, and one of the selected artists to participate in the project, will be your trail guide. On this trail ride you will get to preview the majority of the 120 original works of art; meet and see in-depth interviews of over 15 respected and many world-renowned Native American, Hispanic and Anglo artists, as well as get an up close and personal look at their own art and horse creations. In addition, we ll take you to the live auction where many of the full-size Ponies were sold with proceeds going to benefit charities throughout the state; you'll meet some of the recipients of the monies raised, as well as Star Liana York, the bronze artist whose work is collected worldwide. The award-winning Trail of Painted Ponies documentary has aired on Public Television stations across the country.

The Trail of Painted Ponies (Trailer)

Although there are way to many pony stories to share, here are a few of our favorites 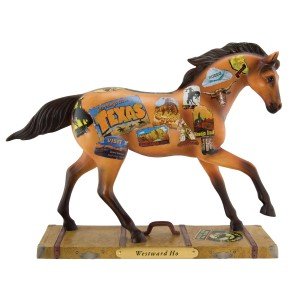 Westward Ho Figurine
Years ago, it was fashionable for travelers to adorn their suitcases with colorful stickers that let the world know where they'd been. This was especially true of those taking road trips through the American West, retracing the trails first traversed by wagon trains that began their journey to California to start a new life with the cry, “Westward, Ho” Well-worn suitcases, decorated with vintage stickers featuring states, historic sites, national parks and roadside attractions were the sign of a seasoned traveler and today they are highly collectible. Westward, Ho! takes us all on a trip back in time. 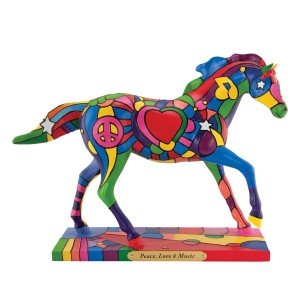 The 1960s were a time when it really did seem like things as simple as peace, love and music could create a revolution that would change the world! Recalling that colorful decade in the retro style, Peace, Love & Music is all about the power of pop art. Strong, vibrant colors and swirling shapes blend together as perfectly as rainbows while artfully incorporating classic '60s icons such as doves, musical notes and hearts. With this Painted Pony, anything is possible, again! 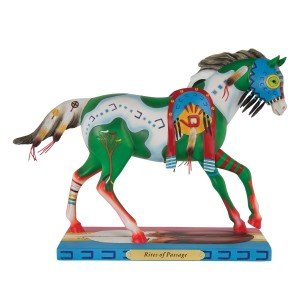 Rites of Passage Figurine
There are many sacred seasons of our lives, marking important periods of growth and change. One of the most joyous is the journey from childhood to adulthood. Rites of Passage tells the sacred story of girls becoming knowledgeable young women and boys evolving into responsible young men through powerful First Nation colors and symbols. This horse, or Sacred Dog, carries the hopes and dreams of all young people as they travel through life. Green represents growth on this journey of color… blue symbolizes holiness and orange marks the beginning and ending of these sacred transitions in life. The four butterflies represent the Creator and the four stages of life for women. The warrior's footsteps are symbolized by four horse tracks as young men learn about their responsibilities. The Tree of Life stands for the past, present and future generations. 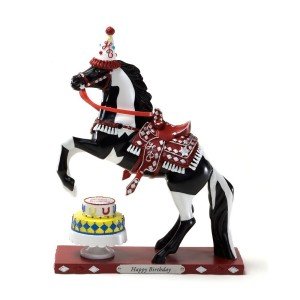 This adorable Happy Birthday Pony is here to wish you a very Happy Birthday! Everyone wants a Pony for their birthday; so saddle up, put your party hat on and get ready to celebrate your birthday! 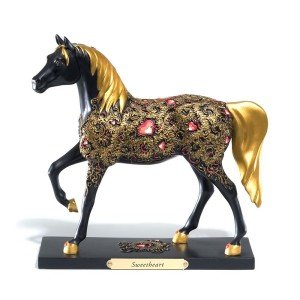 For centuries, sweethearts have shared their affection for one another with sweet sentiments that have been carefully decorated with hearts and flowers. Sweetheart is also a charming term of endearment that symbolizes love and caring. This romantic Painted Pony is embellished with delicate golden tendrils, surrounded by lovely leaves and fanciful flowers that blossom with red hearts which are featured on a stunning black background. This traditional Ukrainian style of painting is appreciated for its delicacy and complexity and has been treasured for over 2,000 years. Discover what true love is all about with Sweetheart.

Paint Your Own Painted Pony 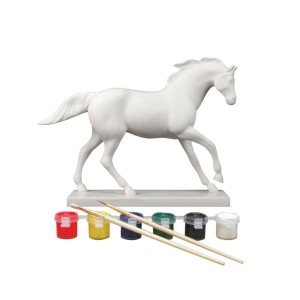 The Trail of Panted Ponies invites you to discover how easy and fun it can be to create your very own Painted Pony! Each Paint Your Own Pony Kit comes with paints, brushes and a complete instruction book. Simply sketch your design on your pony and then begin to paint. If you are not satisfied with your work of art, simply remove the paint with mineral spirits and begin again.

For organizations that are seeking new and different ways of raising awareness and funds, consider holding “Paint Your Own Pony Competitions” or inviting established artists and celebrities to paint a Pony. Then hold an auction and suddenly you have an entirely new way of fundraising. 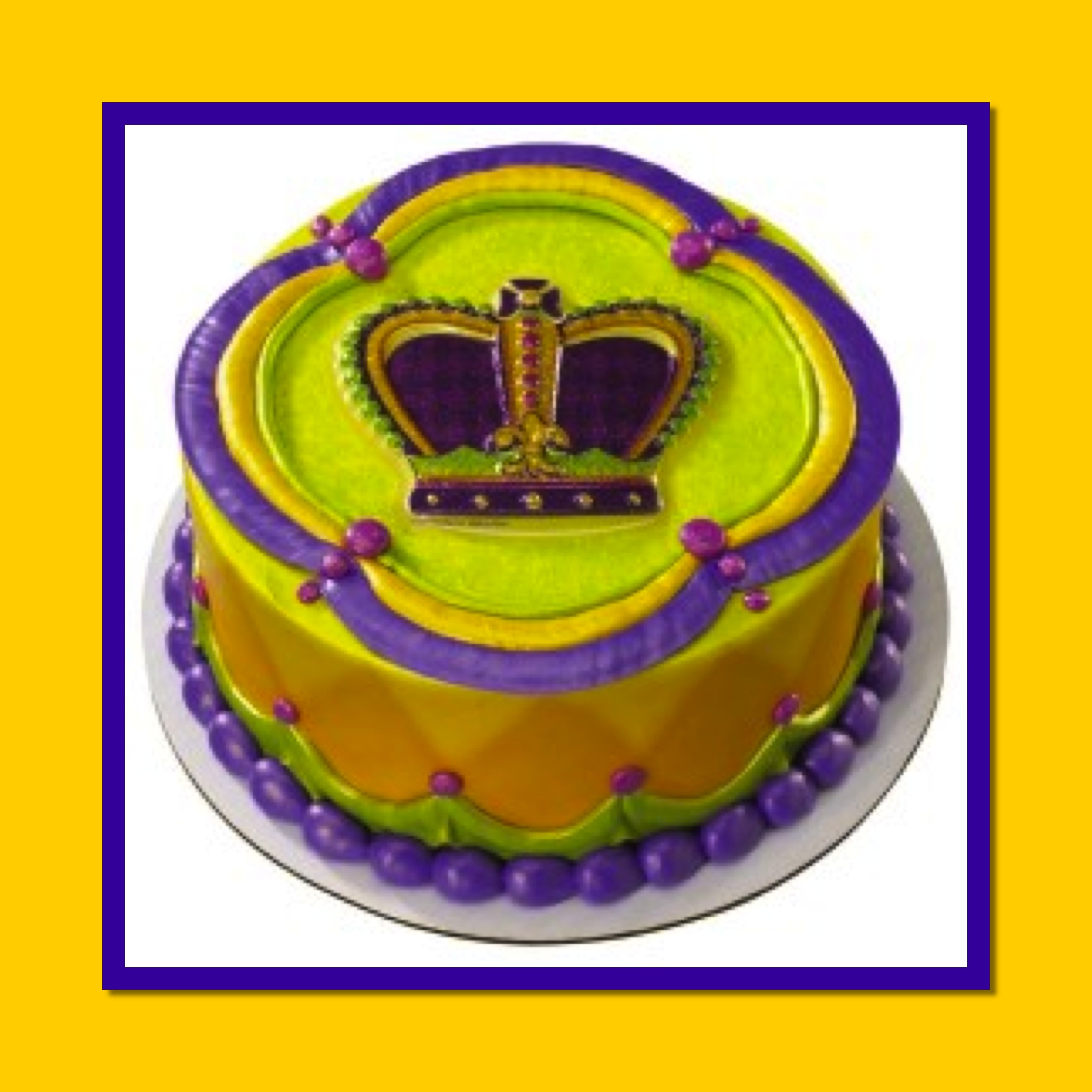 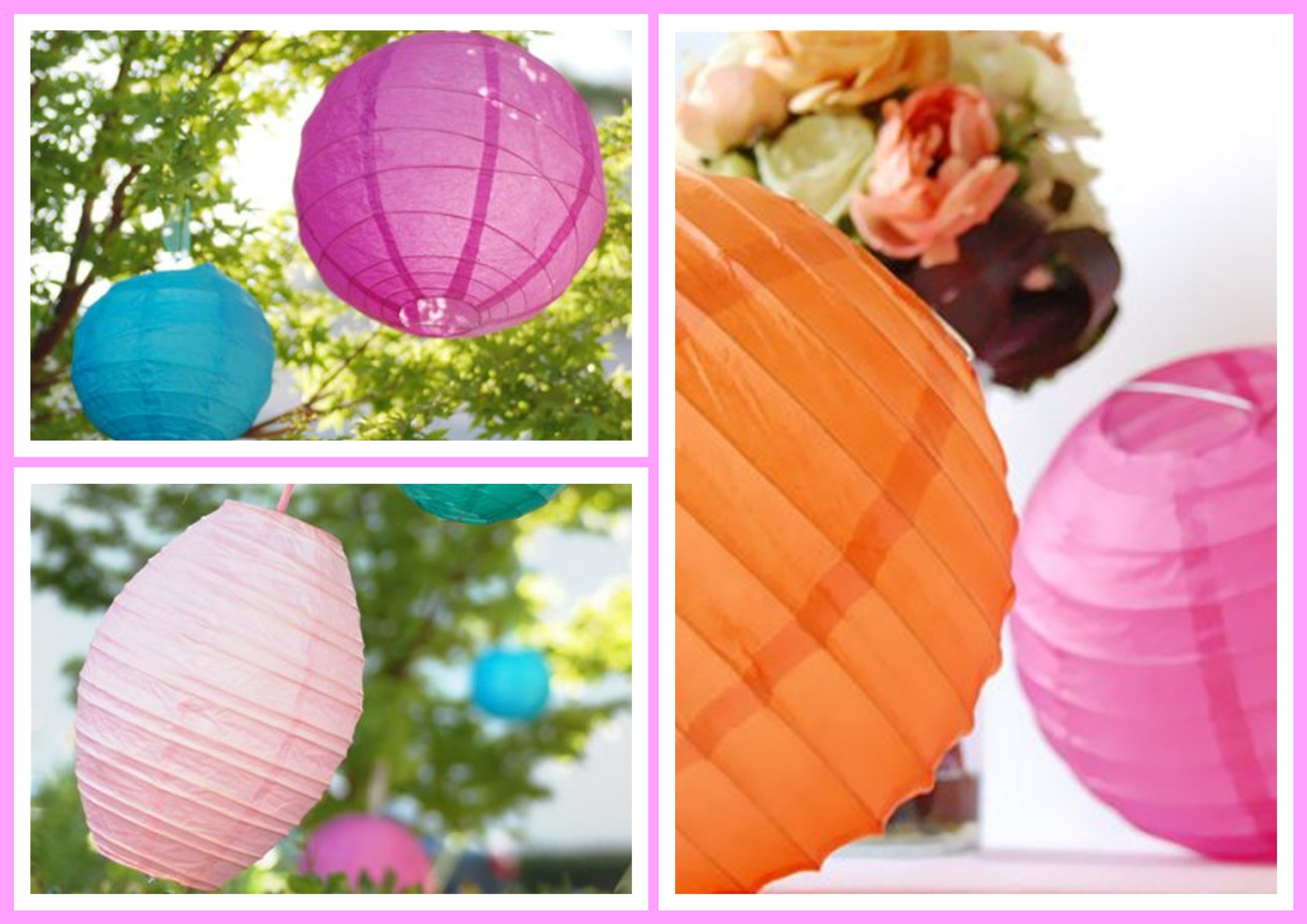 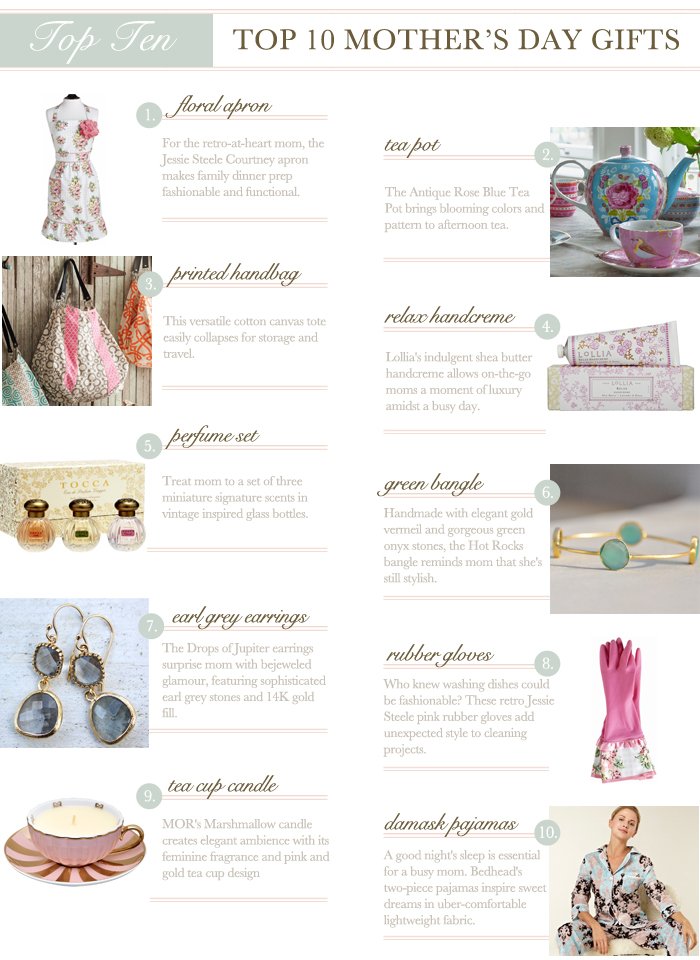