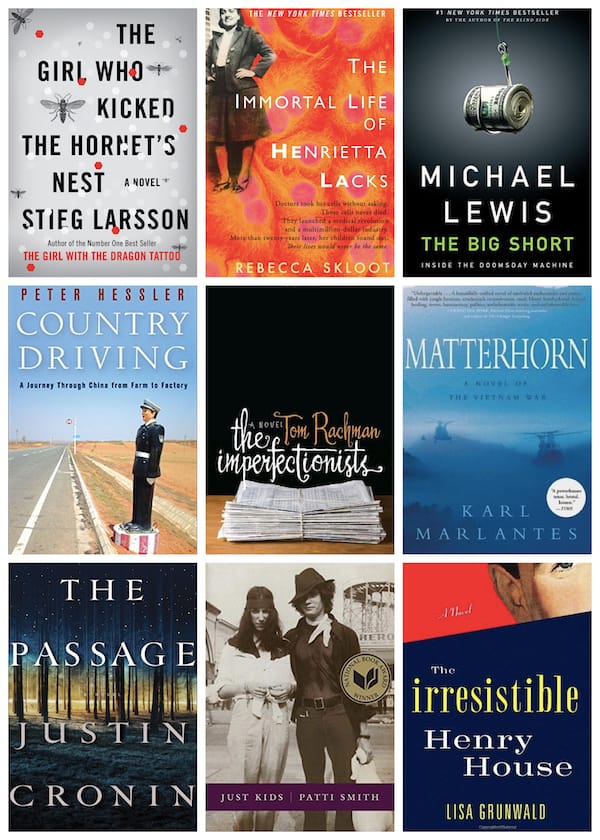 Whether you are hosting a party or a guest at any event, it is important to be able to be conversant with others on everything from current events, to the hottest vacation destinations, to the pros and cons of the iPad.  It is also helpful to be well read and up to date on the best books to hit the bookshelves each year.   So we are beginning a new, hopefully, regular blog feature we are calling Table Topics.  First up …

Best Books of the Year… So Far

Discover Amazon.com's  favorite books of 2010 from January through June–they've selected the top 10 must-reads of the year so far, plus 10 picks each in fiction, nonfiction, and books for kids and teens.  Do you have a favorite book to recommend?  Leave a comment!

The Passage by Justin Cronin

‘s gorgeous writing brings depth and vitality to this ambitious, terrifying epic about a virus that nearly destroys the world. The Passage takes readers on a journey from the early days of the virus to the aftermath of the destruction, where packs of hungry infected scour the razed, charred cities looking for food, and the survivors eke out a bleak, brutal existence. Cronin doesn't shy away from identifying his “virals” as vampires, but they're a far cry from the angsty, romantic types you might expect, and they're inextricably linked to the one girl who could destroy them all. The Passage is a grand mashup of literary and supernatural, a stunning beginning to a trilogy that is sure to dazzle readers of both genres.

‘s The Irresistible Henry House. Henry arrives in the world as a “practice baby,” passed between a dozen young women at the Practice House of Wilton College's Home Economics program in a decidedly pre-Spock era that discouraged mothers from holding babies “too much.” From the beginning, Henry inspires in women the desire for his exclusive attention. But what propels this fascinating story is Henry's struggle to define the desires of his own heart, while the women who love him forge their own identities in the crucible of the 20th century’s sexual revolution.

has observed the past 15 years of change in China with the patience and perspective–and necessary good humor–of an outsider who expects to be there for a while. He takes to the roads, as so many Chinese are doing now for the first time, driving on dirt tracks to the desert edges of the ancient empire and on brand-new highways to the mushrooming factory towns of the globalized boom. He's an utterly enjoyable guide, with a humane and empathetic eye for the ambitions, the failures, and the comedy of a country in which everybody, it seems, is on the move.

The Girl Who Kicked the Hornet's Nest by Stieg Larsson

‘s Millennium Trilogy, but this time her only choice is to take it down or be destroyed by it. Her survival depends on journalist Mikael Blomkvist, and in spite of her most feral instincts, she must trust his judgment when the stakes are highest. The Girl Who Kicked the Hornet's Nest is the finest example of a book that saves the best for last: it roars with an explosive storyline filled with neck-snapping revelations that make the ending of this phenomenal, game-changing suspense series all the more bittersweet.

The Big Short by Michael Lewis

Though many at its center have argued that no one saw the economic meltdown coming, Michael Lewis

, with his unerring instinct for the under-reported story, has found a handful of people who did, and who made a whole of money doing so. Following the people who knew what was happening turns out to be brilliant way to explain the inexplicable, and in The Big Short he makes an entertaining and enlightening return to high finance over 20 years after Liar's Poker, with the same sharp eye for great character and contrarian ideas as more recent favorites like Moneyball and The Blind Side.

Matterhorn is a marvel–a living, breathing book with Lieutenant Waino Mellas and the men of Bravo Company at its raw and battered heart. Mellas is a bundle of anxiety and ambition, a college kid who realized too late that “because of his desire to look good coming home from a war, he might never come home at all.” A highly decorated Vietnam veteran himself, Karl Marlantes

brings the horrors and heroism of war to life with the finesse of a seasoned writer, exposing not just the things they carry, but the fears they bury, the friends they lose, and the men they follow.

The Imperfectionists by Tom Rachman

Printing presses whirr, ashtrays smolder, and the endearing complexity of humanity plays out inTom Rachman‘s debut novel, The Imperfectionists. The chaos of a fictional English-language newspaper provides a stage for characters unified by a common thread of circumstance, but Rachman's depiction of a paper deemed a “daily report on the idiocy and the brilliance of the species” becomes more about the disillusion in everyday life than the dissolution of an industry.

The Immortal Life of Henrietta Lacks by Rebecca Skloot

Henrietta Lacks was a mother of five who died from a cruelly aggressive cancer at the age of 30 in 1951. A sample of her tissue turned out to provide one of the holy grails of mid-century biology: human cells that could survive–even thrive–in the lab. Their stunning potency became a building block for countless breakthroughs, including the cure for polio. For a decade, Rebecca Skloot

doggedly but compassionately gathered the threads of Henrietta's story, fashioning in The Immortal Life of Henrietta Lacks a rich and haunting tale that redefines what it means to have a medical history.

and Robert Mapplethorpe weren't always famous, but they always thought they would be. They found each other on the streets of New York City in the late '60s and made a pact to keep each other afloat until they found their voices–or the world was ready to hear them. Smith's memoir of their friendship, Just Kids, is tender and artful, with the oracular style of her punk anthems balanced by her memory for everyday details like the price of Automat sandwiches and the shabby, welcoming fellow bohemians of the Chelsea Hotel.

The Lonely Polygamist by Brady Udall

seeks the inherent soap opera in a man with many wives, in The Lonely Polygamist Brady Udall finds the slapstick. But Udall

doesn't settle just for jokes (though the jokes are excellent). Golden may be hapless, distracted, and deceitful, but he is large-hearted and so is his story. With a fresh and faultless ear for American vernacular, Udall's big tale of beset manhood effortlessly earns its comparisons to tragicomic family classics from The Corrections to John Irving