The results are unanimous!  At least so far this year, Party Idea Pros favorite teen costumes are without a doubt these Sailor Moon Costumes. True to the appearance of the actual Sailor anime cartoon characters, these costumes are increasingly difficult to find so you will definitely not see them everywhere.  Additionally, they work perfectly for our theory that since most teenage girls travel in packs, their costumes must not only be cute and somewhat appropriate, they also need to be available in multiple colors and styles so all their girlfriends can coordinate.  This particular costume has the added advantage of having a guy version too!  In fact, these would make great couples costumes also! 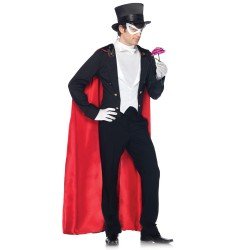 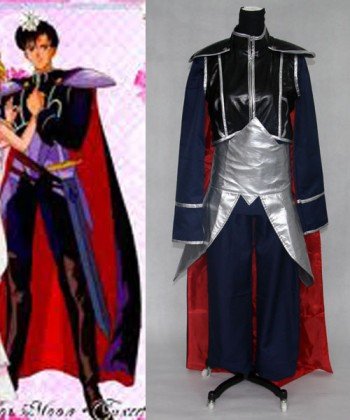 So who exactly is Sailor Moon?  Sailor Moon, also known as Usagi Tsukino, is an underachieving schoolgirl who lives in Tokyo. She meets Luna who is searching for the Moon Princess. Luna discovers that she is destined to save Earth from the forces of evil and gives Usagi a brooch to transform into Sailor Moon, and asks her to form the Sailor Soldiers, find their princess and protect the “Legendary Silver Crystal.” As Usagi matures, she becomes one of the universe's powerful warriors and protects her adopted home planet, Earth, from villains who wish to harm it. Usagi is depicted as carefree and cheerful when at ease but quickly serious and strategic-minded when fighting.

So gals, as you hit the street together as superheroes Sailor Jupiter, Sailor, Mercury, Sailor Mars, and Sailor Moon this Halloween have fun and please be safe!

This Year’s Must Have Back to School Tote 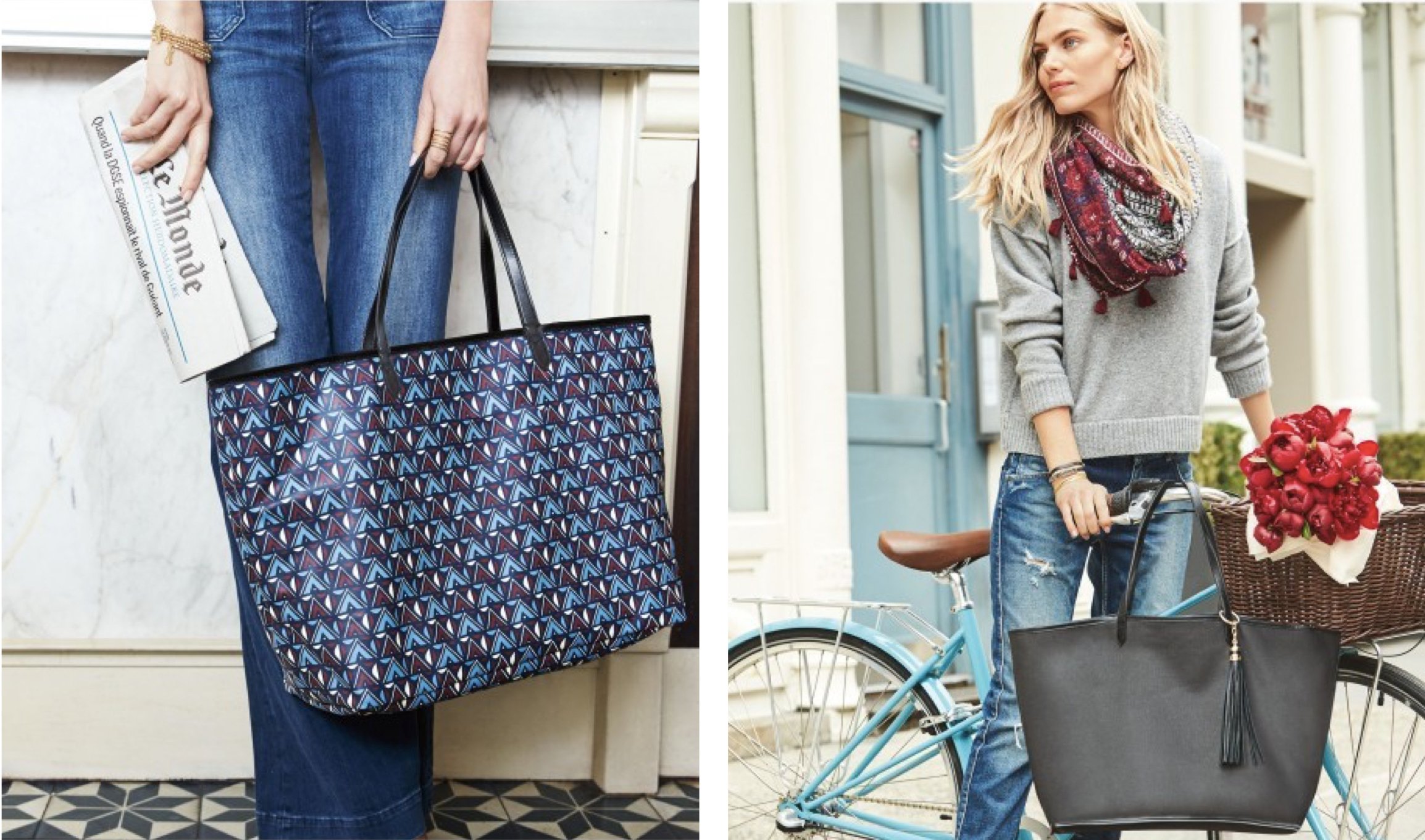 Back to School Tote >> Reversible Voyage Tote in Black & Tribal Prints   **FTC Disclosure Statement :: This post contains affiliate links. This means merchants compensates us when you make a purchase after clicking on our links. Please rest assured, Party Idea Pros only recommends products and companies we <3 & trust!

This Year's Must Have Back to School Tote

PartyIdeaPros talks a lot about creating meaningful, beautiful, festive celebrations but what you may not realize is that we are also very very practical in our approach to life. We hate waste. We are generally pretty darn frugal, and nothing makes us do a double take quicker than a product that can be used in multiple ways.  So this month, as so many of you prepare to go back to school, whether as a student or as an educator, we will be searching for those little things that not only look good but give you lots of options. As always, our first stop >> Stella & Dot's Newest Arrivals. Not surprisingly, Stella & Dot did not disappoint. We believe they have this year's must have back to school tote! END_OF_DOCUMENT_TOKEN_TO_BE_REPLACED 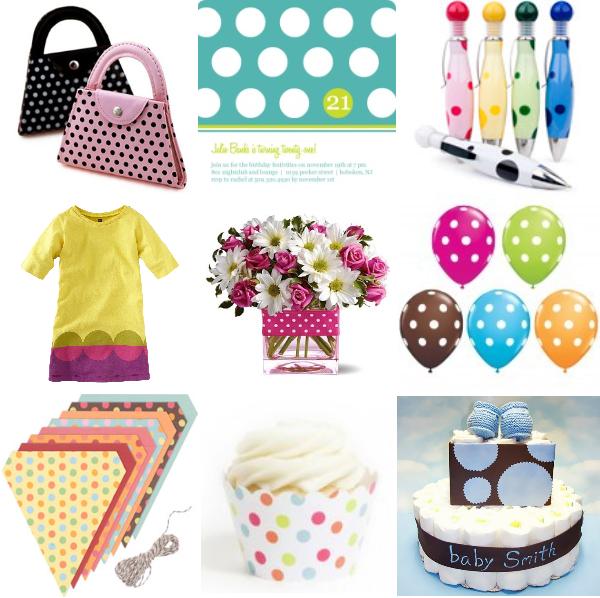 Polka dots, Polka dots everywhere!  Polka dots are definitely in style!  From polka dot invitations to retro polka dot straws to polka dot party decorations to polka dot apparel.  Use dots as the main theme for your next celebration or just incorporate a few here and there for a stylish pop of color and party pizazz.  We like polka dots for birthday parties, bridal and baby showers, Bat Mitzvah and Sweet Sixteen/ Quinceanera celebrations, ladies night out gatherings, and even retirement parties since they add a splash of youthfulness sometimes needed as co-workers enter a new phase of life.

END_OF_DOCUMENT_TOKEN_TO_BE_REPLACED 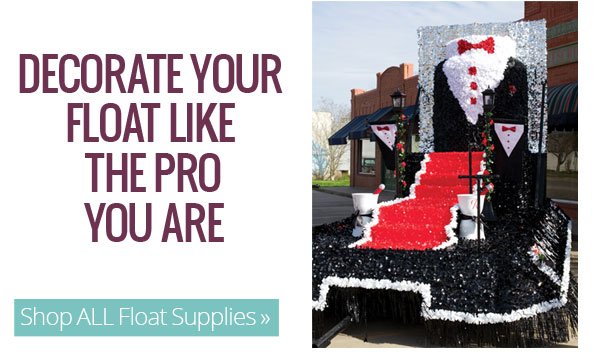 As Junior Class President my job was to coordinate all class spirit activities including organizing the Junior Homecoming Dance and making sure we had the best Homecoming parade float including ordering all the homecoming float decorations and supplies.  However, try as we might our floats always looked a bit rumpled and definitely homemade, in the worst sense of the term.  Today there really is no excuse not to make a professional looking float since Stumps carries any and all of  the Float Materials for Homecoming Parades

you could ever imagine. 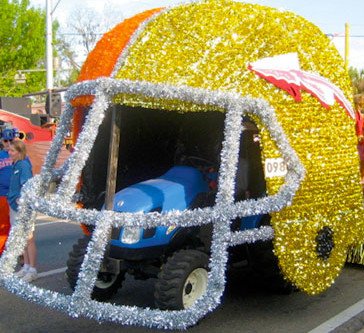 . With the right homecoming float decorations & supplies you are only limited by your own imagination.

Be sure to take advantage of this special Save $25 on Homecoming Orders – every little bit helps!

Also, while you are ordering your homecoming float decorations & supplies, don't forget to pick up your Homecoming Royalty supplies! 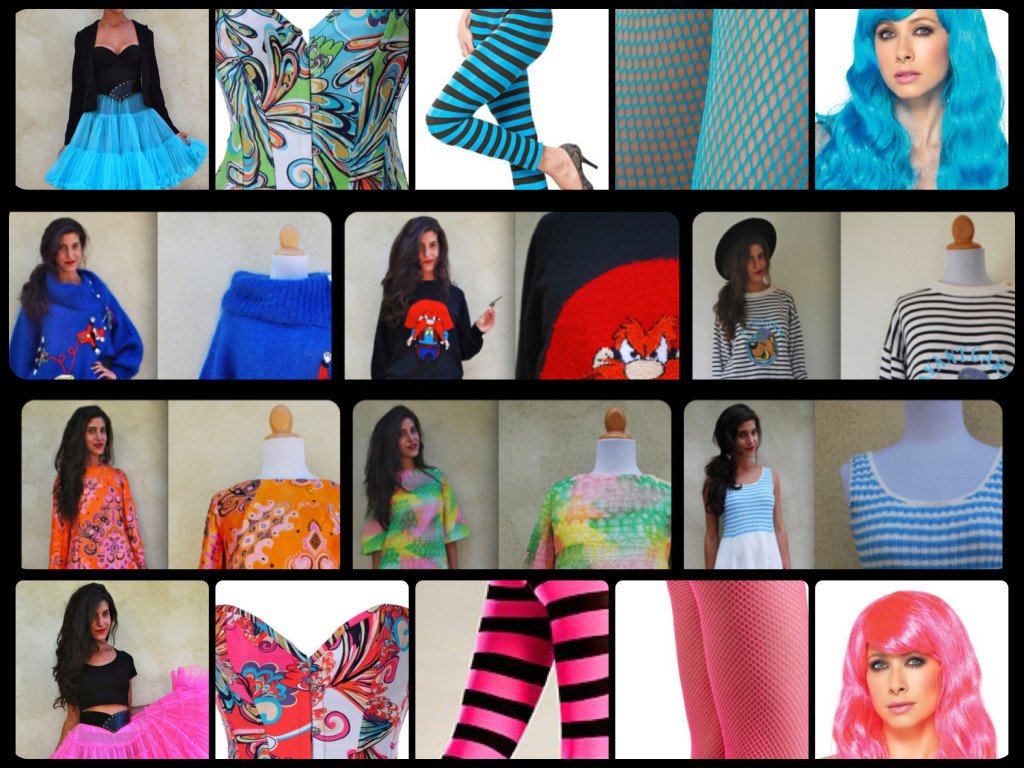 More Halloween costumes!  Again we looked to inspiration from our good friends over at GreatGets.com.  They have put together an inspired collection of vintage finds from  LittleLightVintage that will make for unique one of a kind Halloween costumes.  The bright pink and blue petticoats are extremely versatile.  Think burlesque, clowns, fairies, butterflies, wild neon beauties – the possibilities are endless.  LittleLightVintage has adorable sailor dresses, psychedelic '60s shift dresses, and even a fun tennis outfit that would make a perfect half of a “couples who play together, stay together” couples costumes. Remember, these are one of a kind pieces so if you like something you need to jump on it quickly. Even if your original favorite has been sold, take some time to explore Daryn's Etsy store – chances are you will find something else you like just as much! 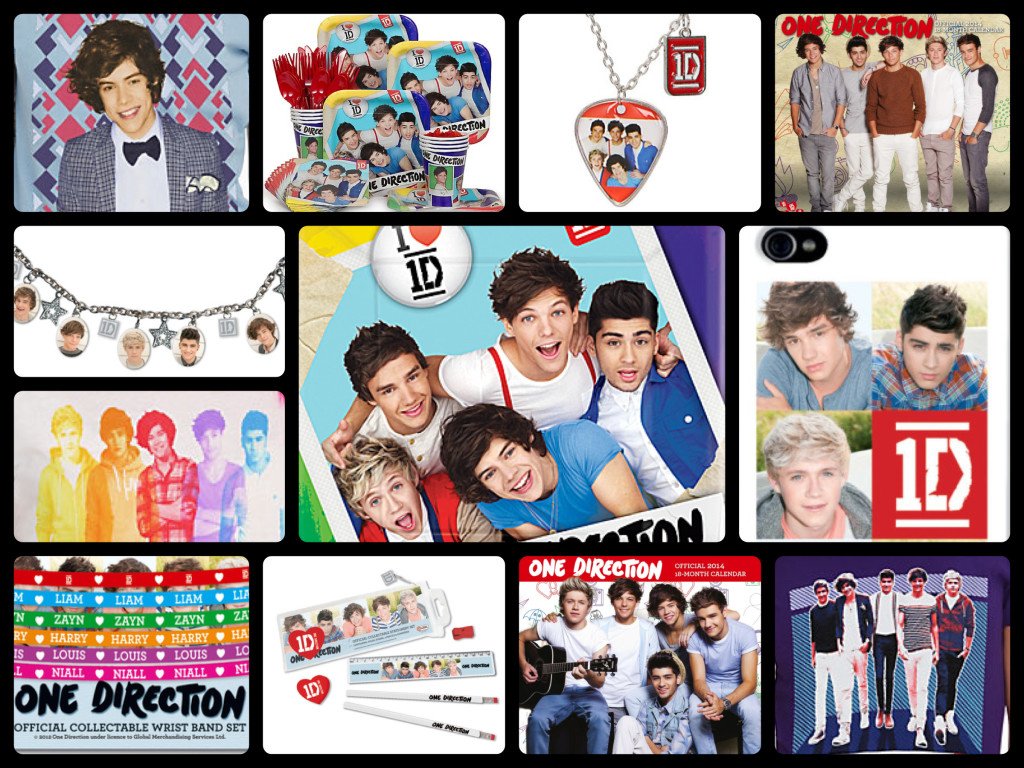 My 16 year old niece, Dani, is a huge One Dimension Fan so whenever I get a chance I try to catch the boy band on TV.  So this morning I tuned into the Today Show special to watch Harry, Louis, Zayn, Niall, and Liam perform in front of 18,000 screaming fans packed into the Today Show Plaza and down the adjacent NYC streets.  Timed to perfection with their new movie One Direction: This is Us set to be released in the United Sates on August 30th, #1DLove shows no signs of waning.

Although there is not a huge selection of One Direction party supplies available there is definitely enough to elicit plenty of  giggles from a gaggle of tweens. There are party kits, party favors, t-shirts (perfect to use as One Direction slumber party jammys) and posters and standups for decoration.  And to top it all off, there is even an iPhone case, charm bracelet and 2014 calendar that would make great gifts for the birthday gal. 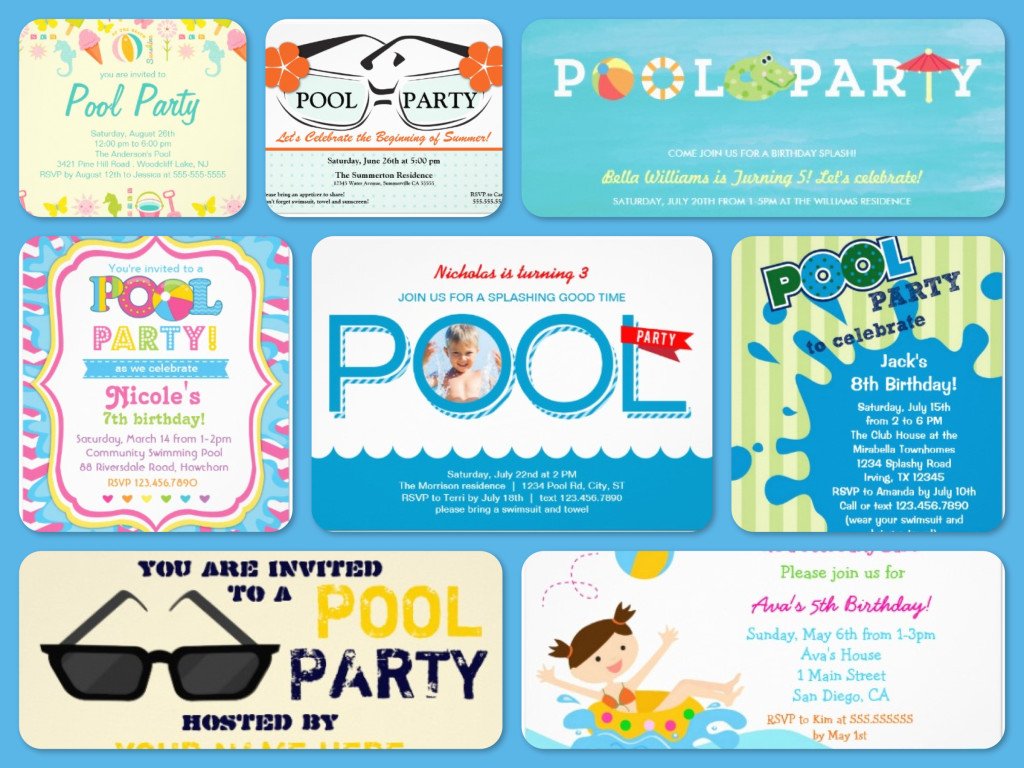 Have you walked outside lately?  We spent a week in New York recently and it was so hot and humid we could barely walk around the block.  We headed down to the beach but got bitten alive by biting flies. All I wanted to do at that time was to jump in a cool clean pool and ever since I have been obsessed with the idea of hosting a pool party.  And now that we are home, we have begun planning just such a party for late August, a celebration of family and friends and  our last chance for some summer fun before the kids go back to school.

Step one – choosing our pool party invitation.  We truly believe that choosing an invitation is the equivalent of choosing the title of a paper … it sets the tone for the entire party! A great invitation — even before the party begins creates a sense of anticipation, especially in children.  Think of all the time your own child spends  looking at those invitations on your refrigerator.  We are featuring just a few of our favorites from Zazzle,  and if you order quickly you can still take advantage of their Christmas in July sale and save up to 65% off all invitations!  Even if you missed this sale keep your eye out for the banner that runs across the top of the page – and be sure to click it to save!

As we proceed with the plans, we will continue to update you on all the other details for our pool party including party favors, party decor, and even food and drink ideas. 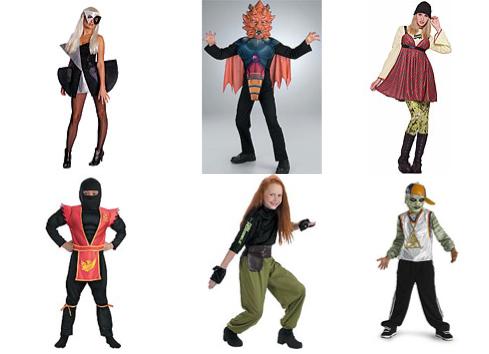 Do you love Halloween but hate to spend money on costumes?  We hear you!  When I received an email from Shindigz this morning promoting their $3.99 discount costumes, I almost didn't bother opening the link figuring at that price the costumes would be junky leftovers from past seasons so you can imagine my surprise when I actually found costumes I like!  At $3.99, I am 100% sure this Lady Gaga costume will be sold out by tomorrow.  Likewise the Born Bad teen costume can't be beat.  Not only 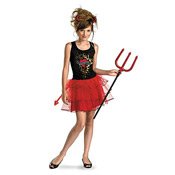 is it a great deal for Halloween, college gals should consider snapping it up just to add their costume boxes for Greek events & college parties – I don't need to tell you that every year you will attend at least one Angel & Devil theme bash and this she-devil is particularly cute!

I just had to share with you today's email!

Save 50% on Halloween Decorations and Costumes. Use promo code WSAEFJ at checkout through 10/19/2012 at 11:59 PM E (certain restrictions apply)

Ask Your Date to Homecoming with CanvasPop 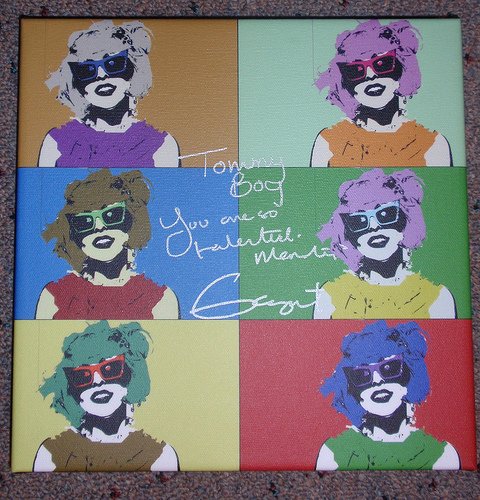 Homecoming dances are just around the corner.  If you haven't yet asked your date to Homecoming and are still looking for a fun and unique way to pop the question, CanvasPop prints have just become a very affordable option.  Simply take a photo of a child or submit a photo of yourself as a kid and automatically receive a $25 CanvasPop gift voucher.  This brings the price of an Instagram CanvasPop down from its current special price of $39.95 to just $15.00 – a really great deal for a lasting memory!   Plus, you will then be eligible to win a $100.00 gift voucher to CanvasPop to capture your party memories forever, not just the ask! (eligibility rules apply)

Once you enter the contest and receive your $25.00 voucher, simply

You can check out our  CanvasPop Review – Turn Instagram Photos into Canvas Art to see exactly how we created our own 12 x 12 photo canvas and learn from our successes and our mistakes.

We just received word from one of our favorite costume merchants, Costume Craze, that they are offering at least 25% OFF all teen costumes for 2 days only:

Over the years we have learned that most teens prefer to travel in “packs” and love coordinating their looks.  Our Cute Costumes for Teenage Girls features lots of costumes that allow teens to celebrate their own individuality while at the same time creating a group impact.  Costume Craze has added a few new Halloween costumes to its site that will perfectly supplement our suggestions for  Goddess Costumes, Bugs and Animals, Ugg Monsters, and Horror/Gothic Costumes!